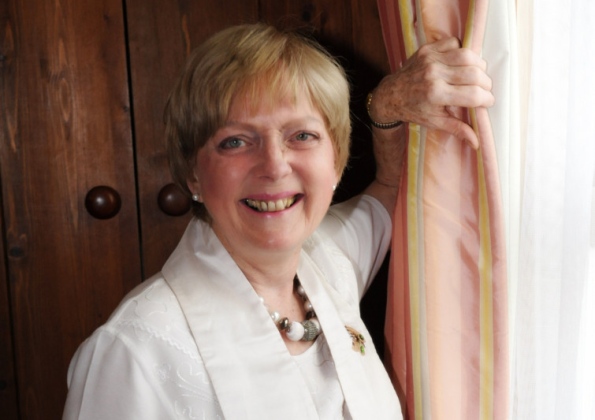 Jean Francis is an ordained minister performing unique and specialised ceremonies in Horsham  – photo by Steve Cobb
Published on 22/03/2013 16:29 – in the West Sussex County Times

As a young girl Jean Francis grew up with an all-consuming fear of death. She remembers weeping at the sight of dead flowers, and not keeping a pet for fear of it dying. But now she has embraced her own demise, is passionate about others facing the inevitable, and is even hosting a ‘Death Cafe’ at a specialist event this Saturday.

“It is a complete turnaround,” the interfaith minister admits, reflecting on her life’s journey from ‘a very sensitive child’ who was teased at school to a confident and charismatic minister penning and presenting ceremonies that help others through life’s more emotional moments.

Jean is an inspirational character who preaches acceptance and tolerance, championing the interfaith movement as ‘the bridge to world peace’.

Interfaith Ministers embrace all religions and honour peoples’ beliefs whatever they are, even if they have none. They are free to host ceremonies anywhere, and at any-time, unconstrained and independent of ‘branded’ religious institutions.

Jean likens her beliefs to a mountain, where the summit is the Divine, or Love, but there are many paths to the top, and we are free to climb in different ways. The movement intrigues me, but despite the questions Jean’s enthusiasm brings to mind, it is Death I wish to discuss with her.

Why is she so passionate about a subject most people find unsettling and difficult to broach?

What is a Death Cafe?

And how did an embroiderer, handicrafts instructor and catering businesswoman become an interfaith minister writing books on alternative funerals and hosting conferences on dying?

“I find it really difficult to understand why people aren’t more open about talking about death,” says Jean, who at nearly 74 has her funeral planned to the last detail with a woodland burial plot already paid for.

“I want people to know they have choices, many choices, around the latter part of life,” she says.

The prevalence of impersonal ‘conveyor belt funerals’ frustrates her. She recollects the generic nature of her father’s funeral with regret.

For Jean, funerals should be celebratory, personal and unique. As an interfaith minister she feels her calling is now to facilitate this.

“People tend to think that you die in hospital, get carted off to the undertakers and then just buried or cremated, but you have so much control over these things, but only if you are open to thinking and talking about it before you die.”

But how do such conversations arise I want to know?

One answer is to attend a Death Cafe – an event designed to afford people the opportunity to discuss dying in a safe environment.

Another option is to start a conversation with Jean.

“In a very strange way death often crops up when I am with other people,” she reveals, spurring my subconscious to involuntarily compare her to Miss Marple for the briefest of moments, before she breaks into laughter and adds: “But I try not to always be the one who suggests it otherwise no one will want my company, will they?”

Her manner is far from morbid, her openness refreshing, and in her company Jean’s candour seems perfectly natural.

Can we discuss your death, I ask?

“Yes,” says Jean without a moment’s hesitation. “I’m deeply interested in environmental matters so for me woodland burial is the only way forward because I know what devastation cremation can cause to the environment, although it isn’t talked about.”

How do you feel about assisted dying?

“I think people need to have choice.”

But have you instructed your loved ones to turn the machine off?

“You bet – I have a living will and I would encourage people to do that.”

What about having ‘don’t resuscitate’ tattooed on your chest I joke – but Jean simply declares she is afraid of needles, before adding: “If I get to a good old age I don’t want to be kept alive and be an encumbrance to anybody. I am quite comfortable with the arrangements I have made and I know exactly what is going to happen to me.”

I wonder how many of us can say that in all honesty?

In contrast, Jean knows how her life will be celebrated. She also knows everyone at her funeral will be enjoying a cream tea afterwards.

“My old catering crew said knowing you you’ll have the scones ready in the freezer,” says Jean, before starting to giggle.

We discuss the ageing population and Jean says how important it is that people make preparations.

“Discuss what’s available at a Death Cafe,” she recommends, as even Jean recognises ‘it is not a subject you can often talk about in the pub or at dinner!’

This Saturday Jean is organising a Transitus Open Day at Sedgwick Park, Nuthurst, a whole day of death related talks, networking, and theatre, with a Death Cafe also prominently promoted on the bill.

But surely you recognise that many people will see the name and think it’s a bit weird, I ask?

“Ooh absolutely, I am sure there are plenty that will back off. Several people have even said why don’t you put something a bit softer like Promotion Cafe,” says Jean – Promotion being the Salvation Army’s euphemism for Death.

But that is merely professional curiosity, my mind racing as to how best to market such a difficult proposition, without alienating the very people you most want to confront the issues – those who are afraid.

But if you, like me, have had your curiosity piqued and wish to challenge your preconceptions and discover more about death, perhaps a visit to a Death Café would be a good move, designed to alleviate the fear of the unknown, and help us determine our own destiny.