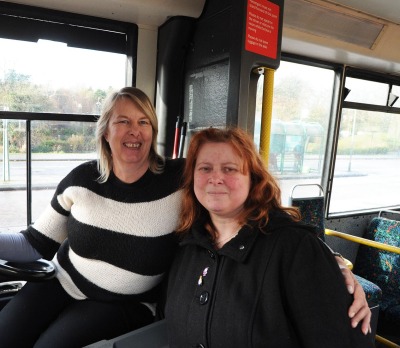 27 January 2014
A Berkhamstead bus driver went the “extra mile” when she made a detour to a hospice after a passenger discovered her father had just died.

When Lisa Gregory received a call telling her that her father, who she had been travelling to see, had died at the Hospice of St Francis on the outskirts of Berkhamstead, bus driver Michelle Littlechild bought her a cup of tea before dropping her off at the hospice so that she could be at her father’s bedside.

After reporting the story, local newspaper the Hemel Hempstead Gazette helped reunite Michelle and Lisa, who was keen to thank the compassionate driver.

Lisa had burst into tears on hearing from her niece that her father, Tony Gregory, had died. Bus driver Michelle and the passengers comforted Lisa, and, with the agreement of passengers, made a detour to the hospice.

Hospice director Dr Ros Taylor said: “Time together after a loved one has just died is very precious. I’m delighted that the bus driver found the compassion to respond to Lisa’s request and go the extra mile, literally, to take the detour to St Francis to support Lisa in her hour of need.”

Fittingly, as an organisation The Hospice of St Francis prides itself on going “the extra mile”; it’s even the name of a short promotional film it released in October.