Featured in the Autumn 2013 edition of  Farewell Magazine.

I wrote this article about the experience of family friends to share how comforting, beautiful and heart-warming a funeral ceremony can be. Then later I conducted my friend’s Memorial Service. 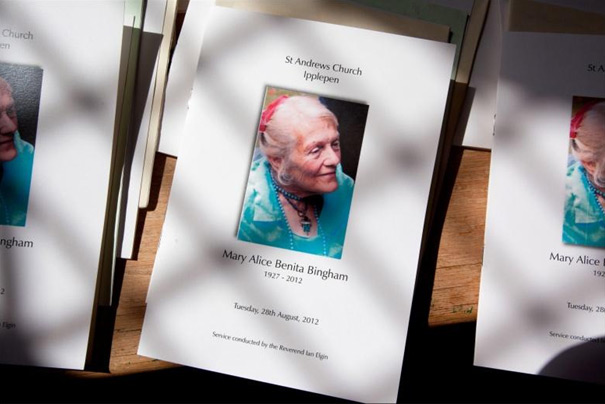 ‘I just want the love to continue,’ Mary replied when asked if she had any special requests for her funeral. 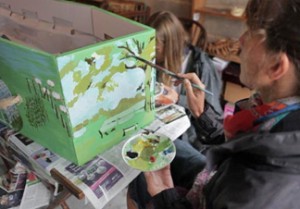 Mary was affectionately known to her twelve grandchildren and fifteen great grandchildren as ‘Moomin.’ The day before Mary’s funeral, her grandchildren gathered and using photographs from family albums for inspiration they began to decorate her cardboard coffin. Pictures of the ancestral home were meticulously painted around the sides; the house and gardens, the stable yard, fields full of sheep, 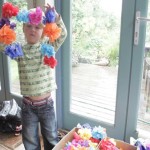 the vegetable garden, woodland and the meandering stream, straddled by a bridge where as small children these now, mature young adults had played Pooh Sticks. 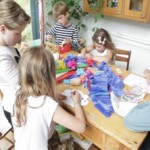 As they painted they laughed and cried as they remembered.

Everyone played a part; meanwhile Moomin’s great grandchildren were occupied by making brightly coloured tissue paper garlands, which would festoon the funeral car for their great grandmother’s final journey. 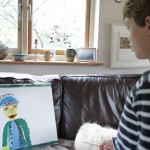 Mary’s talents as an artist continue, as one of her great grandsons paints a portrait of her. 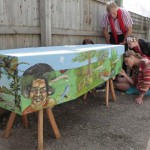 The morning of the funeral dawned bright and sunny as artists added finishing touches to the beautiful casket. 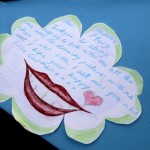 With the coffin lid now in place, 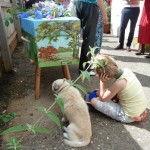 people as they gathered were invited to write messages on white cloud shaped stickers and place them on the sky-blue lid. Meanwhile the children collected flower petals from the garden, which they scattered on the resplendent panorama. 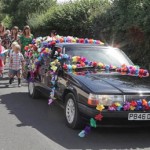 The air was full of celebration but Rumpus, one of Mary’s dogs sat beside the coffin and could not be enticed away until he had said his final goodbye to his beloved mistress.

Everyone helped to garland the funeral car, which was aglow with colour; just how Mary would have liked it. 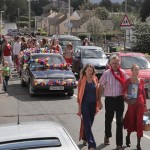 The sun shone as three of Mary’s children, Anna, Jo and Roger walked in front of the car as it moved slowly through the village towards the church. A colourful procession formed behind the adorned vehicle, which included Mary’s dogs led by two small boys who followed amongst; family, friends, neighbours, toddlers and babes in pushchairs. The scene reflected perfectly, the life of a dearly loved woman. 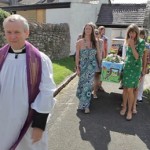 The Reverend Ian Elgin met the procession at the gates of St Andrews Church, Ipplepen and led the way, as the coffin was carried along the pathway into the church by Moomin’s twelve grandchildren. As they walked they sang, ‘Amazing Grace.’ 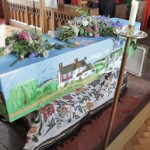 The lovingly decorated casket was put in place as a traditional Christian service proceeded for Mary Alice Benita Bingham and was interwoven with many personal touches. 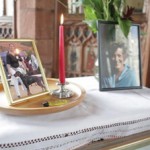 A candle was lit and placed beside a photograph of Mary’s fourth child Felicity, who was unable to be present. Memories of Moomin were spoken by family members  and a piece of prose that Mary loved by Sai Baba was read by Jo. 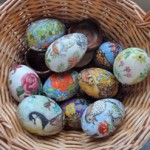 Mary, herself an accomplished artist, had spent her last months painting goose eggs in elaborate designs. She sent one as a gift to the Queen for her Golden Jubilee.  A basket of these eggs were in the church as were several of her paintings. 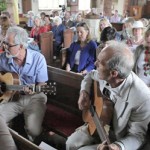 The Lord’s Prayer set to music by David Ash, was played by David and his brother Steve on guitar and everybody joined in with the singing. 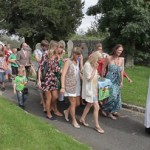 Following the committal ‘Autumn Leaves’ was played as Mary’s grandchildren carried her coffin back to the car. As they walked they sang spontaneously: ‘She Has the Whole World in Her Hands.’

Everyone met at Mary’s home for afternoon tea. Later that day Roger and Jo accompanied their Mother to the crematorium with the car still fully adorned with garlands as it made its way down the motorway. In the evening people gathered at Anna’s home to eat, drink and make merry while listening to the talented family music-makers as the life of Moomin was well and truly celebrated.

Everyone took part in the occasion in whatever way they felt able. It was a truly joyous departure and the love certainly continues!

The above frames are taken from scenes in the film ‘Remembering Moomin: https://vimeo.com/51340863 by David Graham: Funeral Film Productions. Email: post@davidgraham.net

On Saturday April 6th a memorial celebration will take place during which Mary’s cremated ashes will be mingled with those of her late husband John and scattered in woodland near where they had lived in Sussex. Details of this ceremony to follow.